When it comes to the British Isles, England offers a rich yet not that well-known range of myths and legends. Sure, Ireland, Scotland and Wales are perceived as territories with a more popular folklore. Everybody are familiar with Nessie or leprechauns. For going into depths of mythology around the British Isles, immerse into the magical stories of England’s fairies, scary creatures, and legendary heroes. Here are a few examples, some famous ones and some that you might not have heard about.

When you walk in a forest, you often come to crossings, and might remember something about taking the path less taken. For certain crossings, there might even be a path that is indeed less taken, as some have an invisible path that would enable you to not just enter a different part of the forest but also a different world altogether. At some of those crossings, you might meet a rather strange looking dog. Beware - if he managed to bark at you three times, you might be in trouble! Walking these possibly enchanted forests, you might want to avoid strange looking, mythical dogs snooping around the crossings – unless you would indeed be interested in being lost in some magical other-world. 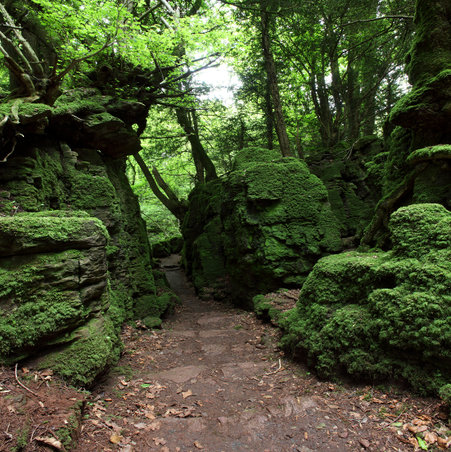 Puzzlewood, an ancient forest site of pathways and caves in the Forest of Dean. Moss covered rocks and sunken pathway, with a dense tree canopy.

Ghost of a hunter

With so many mysterious forests, England cannot be a boring ghost-less place. However, not all of them are there to haunt you or lure you into the darkness. If you ever fancy a visit to Windsor Forest, you might encounter the ghost of Herne the Hunter, who lived during the reign of Queen Elizabeth I. Unfortunately, after some offense he committed, he decided to hang himself. Since that moment, he is said to patrol the forest. Locals say he is there in times of need, and would always be a guardian of Windsor Forest to make up for the mistakes of his past.

Jack O'Kent is a folk hero who appears in numerous stories. One of them witnesses that Jack apparently managed to trick the devil. He asked the devil for help to build a needed bridge over a river. The devil agreed, but as you might suspect, he did not agree without asking for a high price. Jack O'Kent would have his bridge as long as he agreed on one thing: The devil would be allowed to take the soul of the first person to cross the bridge. Jack O'Kent agreed quickly. But he did trick the devil: Instead of walking over the bridge himself, or having an unsuspecting peasant walk over it, the trickster threw a bone when a dog was close. The dog took the bait, ran over the bridge, and so the devil received the soul of a dog. After all, he had not been too specific about whether it had to be a human! Could it be one of the dogs appearing around the mysterious crossings in the woods? Who knows!

Fear not - there isn't actually anything grim about the church grims. They are a little like the Scottish brownies, but as the name says, they only live in churches. They come out at night and sweep the church, sometimes also ringing the bell. Church grims are, of course, quite popular with priests. They save them a lot of time and keep the church looking neat!

King Arthur and Merlin are two of the most famous mythical heroes in England. There have been novels, plays, movies, and many pieces of art that were inspired by King Arthur and the legends surrounding his life and deeds. Merlin, a wizard, has received just as much attention, even with movies solely focused on the life of the fascinating character – sometimes as a young man, sometimes as the old wise wizard. There are many places in England where you can delve deeper into the legends surrounding King Arthur, floating between his reality and fiction. You can visit his probable place of birth, visit castles, and check out the place where he was supposedly buried.

Standing as one of the world’s greatest mysteries, Stonehenge appears as a symbol of many mythological beliefs as well as scientific guessings. Stonehenge is very old – but not the only stone circle in the British Isles. There are a few different theories on how it was used and what the real purpose behind it was. It could have been a site for ritual sacrifices (as that's what people in the past did to keep the gods and goddesses happy), an ancient calendar, or a site to watch the movement of the stars. But how it was erected – it remains a mystery. 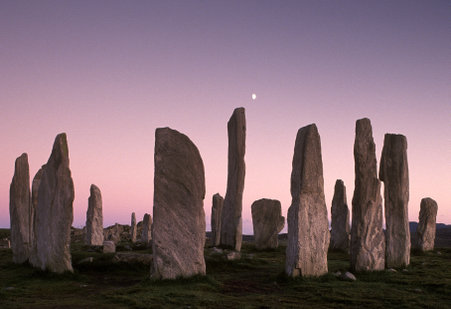 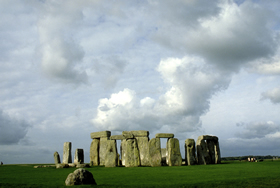 Wookey Hole is famous for the petrified witch in one of its caves. Apparently, the evil witch (as they were of course all evil) lived in that cave, and her uncanny presence made the people of the area became a bit nervous. So they asked a priest from Glastonbury to come and help them. Add a bit of holy water, and the people did not have to worry about the Wookey Hole Witch any longer. The holy water did put an end to her days – and you can actually still go and visit her remains.