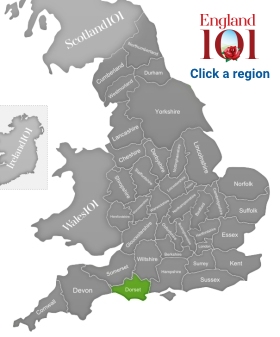 Despite its small size compared to Cornwall, Devon and Somerset, Dorset doesn’t stand in the shadow of its southwestern neighbours. Boasting one of England’s most celebrated coastlines and Europe’s largest natural harbour – which played a vital role in the D-Day landings – as well as castles and country houses galore, this bucolic region is rich in natural beauty and heritage landmarks.

Dorset’s fine landscapes provide the perfect backdrop for the region’s ancient castles. Visit striking 17th-century Lulworth Castle and Park, where you can climb the tower for terrific views, or peruse the ornate rooms at Highcliffe Castle, once rented by Harry Selfridge, the American founder of the London department store, Selfridges. 20 minutes east by car, the ruins of Corfe Castle come to life thanks to audio story points and various ‘quests’ which unravel tales of the castle’s history, including the English Civil War.

Sherbourne Castle was once owned by Sir Walter Raleigh, a landed gentlemen involved in organising the first colonial expeditions to the New World. Today visitors can explore the castle and grounds (which were designed by famed landscape architect, Capability Brown) on a self-guided tour.

Make time to wander the 8,500-acre Kingston Lacey estate. The Italian-style manor house houses an array of paintings by Rubens, Van Dyck, Titian and Brueghel, as well an an impressive collection of Egyptian artefacts.

Fans of the Oscar-winning epic Lawrence of Arabia might be curious to see the secluded home of the real T. E. Lawrence, Clouds Hill. The house is preserved as Lawrence left it before his tragic death in 1935. Thomas Hardy also hailed from Dorset – visit his birthplace, Hardy’s Cottage, and Max Gate, where he spent much of his later life.

For a quirky historical outing, make a beeline for the Cerne Giant – an ancient, mysterious chalk outline of a 108ft naked man on a village hillside. There are many theories behind his existence, but one thing’s for sure: he’s quite a sight.

Dorset is blessed with brilliant beaches. One of the most famous – and certainly the most photographed – is Durdle Door on the Jurassic Coast, which features a beautiful natural limestone arch. Chesil Beach is also well-known thanks to prominent English novelist Ian McEwan’s book, On Chesil Beach. Others worth a visit include World Heritage listed Lulworth Cove and the dramatic cliff-rimmed West Bay Beach. The Unesco-listed Jurassic Coast as a whole is a fossil fanatic’s dream – start your explorations at Lyme Regis Museum or on a fossil hunt at Charmouth.

There are many ways to enjoy Dorset’s scenery. Ramble through Tout Quarry Nature Reserve and Sculpture Park to enjoy al-fresco art with your clifftop views; let the hills roll past your window on the historic Swanage Railway; or see the coast from a different perspective with Fore Adventure – will you choose to kayak, snorkel or standup paddleboard? For more watersports, head to Europe’s largest natural harbour, Poole, for kitesurfing, sailing and even scuba diving.

Want a really wild getaway? Take the ferry to Brownsea Island and go camping, just as the very first Scouts did on this very island back in 1907. The island is home to some fantastic birdlife, as well as the rare red squirrel.

War history buffs will love The Tank Museum in Bovington, with its impressive collection of – you guessed it – tanks, including the German Tiger and Modern Challenger 2. Exhibits span from World War I to the present day and special events offer the chance to see tanks in action. Brad Pitt visited the museum to celebrate the release of war film Fury. The Keep Military Museum – once used by the 1st Quartermaster Company of the American Armed Forces – houses detailed exhibits on various wars and the history of the Devonshire regiment, while Weymouth’s Nothe Fort offers the chance to see cannons and World War II vehicles in a real coastal fort.

Book a table at Sienna in Dorchester, which is run by a MasterChef quarter finalist, or eat at Brassica, where 85% of the produce comes from within 15 miles of the restaurant. The Green Restaurant offers excellent value with its menu du jour, which often includes scrummy local ingredients such as pot roasted guinea fowl and Dorset blue vinny cheese.

For scrumptious food with a sea view, try Seaside Boarding House in Burton Bradstock, The Crab House Cafe in Weymouth or Key West Bar and Grill in Bournemouth. Want a tea or coffee to remember? Soak up the vibes at boho Soulshine Cafe or tuck into a scone at the Blue Pool Tea Rooms.

Oysters at the Crab House Cafe 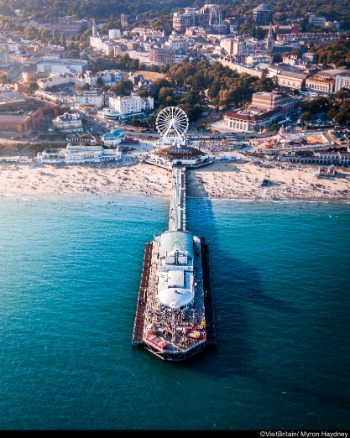 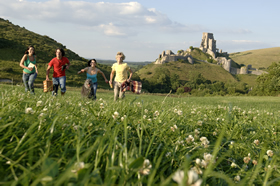 Friends running across a field with their dog reliving the adventures of 'The Famous Five' at Corfe Castle on the Isle of Purbeck, Corfe Castle, Dorset, England.

Our 101 team have been working with local tourism, business, community and Council initiatives to bring you some of the best ways for you to live your connection to Dorset.