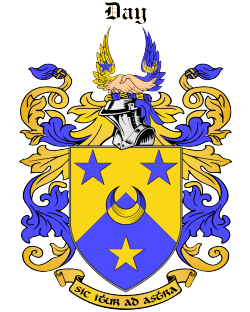 This is a very interesting surname. Altough usually English, it has two possible origins. This first is as a derivative of the famous personal name "David", a popular given name throughout the British Isles during the Middle Ages. Derived from the Hebrew word meaning "beloved", it was one of a large group of similar biblical names introduced into Europe from the Holy Land by the famous crusaders of the 12th century. Its popularity was due in part to the fame of the king of Israel, and much later to its being the name of the patron saint of Wales. It was also the name of two kings of Scotland: These were David 1st, who reigned from 1124 - 1153, and David 11nd, 1329 - 1371...

In English, from a pet form of David.

An occupation name 'the deye' or 'day,' a maid, a dairy-maid 'dairy'. Middle English word day(e), dey(e) ‘dairy maid’, ‘(female) servant’- from Old English, cognate with Old Norse deigja meaning ‘female servant’, ultimately meaning ‘to knead’, and related to the word for dough, which came to be used for a servant of either sex.

In Irish, an Anglicised form of Gaelic Ó Deaghaidh or Ó Diaghaidh (O’Dea).

In Scottish, an Anglicized form of the Gaelic personal name Daìdh, a colloquial form of David.

In Welsh, from Dai, a pet form of the personal name Dafydd, a Welsh form of David.

A tradition states that a follower of the Conqueror settled at Eye in Suffolk, and assumed therefrom the name of D'Eye or Deye.

From the Old Norse: Dagr. In Swedish: Daug. In German: Dege. In Flemish: Day, Daye; a personal name.

Charles Day, an English convict from Kent, was transported aboard the "Argyle" on 5 March 1831, settling in Van Diemen's Land, Australia.

In 1881, the most common Day occupation in the UK was Agricultural Labourer, along with Labourer and Farmer being the top 3 reported jobs worked by Day. A less common occupation was Carpenter.

Another noted, Jason Day (b. 1987), an Australian professional golfer who won the 2015 PGA Championship, with a total score of 268 (−20), at the time the lowest score in relation to par ever recorded in a major.

Tell us about any famous DAY (or surname variant) you think we should add here. We will get our genealogists to check them out and add them to the list. Thanks!

Join the conversation with the DAY tribe

Areas of Origin for DAY

Write an email address and click 'Invite' to share this page with more members of the DAY tribe.

Discover where the DAY Family members live around the world

Show off the DAY Family Crest…