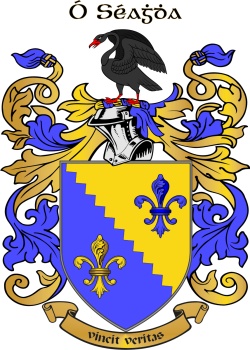 Design your own SHEA Family Crest

O'Shea (Shea, Shee) is an Irish surname (an anglicized form of the Irish patronymic name Ó Séaghdha), originating in the Kingdom of Corcu Duibne in County Kerry.

Thanks for the info Keller Clark

My great grandfather was Cornelius Joseph Shea born in Newmarket, Cork, Ireland in 1867. Immigrated to United States Boston, Mass. Settled in Lawrence Mass. Died in 1924 in lawrence, Mass. He married Abigail Sweeney (my GG Grandmother from Ireland. She was born in 1869.)

I have been searching for family and this is what I have found about my great-grandmother (it may seem like I am really old but my dad and his father had children late in life), her name was Catharine Shea, her nickname was Cate, Kate. She married Andrew Warren in Kill (Kill and Lyons/Kill and Leighlin parish Roman Catholic), Co. Kildare in August 1848, then had a son, John (maybe E middle initial) in October 1849, Oughterard, Co Kildare. We know Andrew came to the US and must have come through Charleston, South Carolina port as they had a large # of Irish that came to work on the railroad to build from the coast to Nashville, Tennessee we think it was around August of 1851, he built a house in Chattanooga, TN and stayed on with the railroad, she came later with her young child that could walk (story about them in local paper...she said she was from Dublin.) They first appear on the census record in 1860. The other children we know of were, Andrew B., Mary Edna, Catherine, James Joseph, Thomas Joseph, and Elizabeth (Lizzie). There was a James Shea, as a sponsor, and a Mick Christian, Eliza Casey or Carey, and a Eliza Keegan (I think). No family photos or stories other than about her walking through the brambles to get to her new home in the "wilderness" of the new city, and a blurb in a local history book about them being Northern sympathizers and their house was used by the US Army provost marshal and Gen. Rosecrans would come to meet him there, then came back to town years later and visited them, also they had a donkey they were hiding in the house during the war, and dead soldiers in their yard, they also hid "conscientious objectors" in their attic, Andrew helped start a temperance society, and they took care of people during the Yellow Fever of 1878 and lost Andrew and daughter Catherine, the daughter, Lizzie was mentioned in the Atlanta paper as also having helped the sick. Cate was noted as being a refined woman. My dad only said they came over because of the "potato famine" (i know, I know...) I went to Ireland in 2019 and when in Dublin spent a little of my "free" time at the NIL and the EPIC Fam. Hist. Center. I did not get a chance to go to Oughterard/Ardclough Co. Kildare. I know that Cate's children all used the name O'Shea instead of Shea as her surname on her death cert. and any of their records, marriage, death. Anyone related?

Hi I’m looking for a Michael shea / O shea from Waterville co kerry ! He would be in his late 70’s early 80’s! He was married to Hana o shea ( born O Sullivan) and they had two daughters Can anyone help me find him or have any info please

Areas of Origin for SHEA

Write an email address and click 'Invite' to share this page with more members of the SHEA tribe.

Discover where the SHEA Family members live around the world

Show off the SHEA Family Crest…