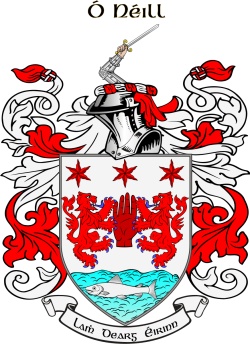 Design your own O'NEILL Family Crest

Apart from the great Ulster O' Neills, there are several septs of O'Neill, quite disparate, across Ireland:

The O' Neills of Thomond, ancient chiefs in Bunratty, Co Clare; the O' Neills of Co Carlow, a sept located in Rathvilly Barony; the O' Neills of the Decies in Co Waterford, and the name is prevalent enough in the adjacent counties of Cork and Tipperary.  None of these septs are related to the Ulster O' Neills, but are interesting in their own right.

The Ulster O' Neills have been one of the most prestigious of Irish families (the red hand of Ulster is taken from their arms) and descend from Niall Glun Dubh 'black knee', High King of Ireland, killed in 919 by the Norsemen. The first to use the name was Domhnall Ó Néill, the latter's grandson.  The O' Neills are just one family of the tribal grouping Uí Néill, who all claim descent from the legendary Niall of the Nine Hostages.  MacLysaght writes that the surname goes back to the 10th century king, rather than the legendary hostage taker ('Irish Families', 1982).

The O' Neills were the leading family of the tribal group the Cinel Eoghain, from Eoghain the son of Niall 'Noighiallach' (of the nine hostages). Their original territory comprised the modern counties of Tyrone,  Donegal and Derry.  A branch were established in Antrim; these were dubbed Clann Aodha Bhuidhe, the family, or tribe, of Hugh Boy, who was killed in 1283.They were de facto kings of Ulster; it was diplomacy that prompted Henry V111 to make Conn O' Neill the Earl of Tyrone, an attempt  to curb their power.  To further dismantle their Gaelic identity, Queen Elizabeth had their Tullahogue inauguration stone broken up.

The Elizabethan English invaders persecuted them with fire and the sword, but they led the Gaelic resistance, and enjoyed a resurgence in the 17th century.  Hugh O' Neill [1550-1616] second Earl of Tyrone, was Gaelic Ireland's great leader; the defeat of his army at Kinsale in 1601 was a terrible blow.  It was in this century that there appeared two of the finest war leaders Ireland, even Europe, has ever seen:  Eoghan Ruadh, angl Owen Roe, who spearheaded the Confederate Gaelic army after 1641; and Aodh Dubh, angl Hugh Duff, who inflicted the heaviest losses Cromwell's New Model Army received in Ireland, at Clonmel in 1650.

In Petty's mid 17th century 'Census' we find a few O' Neills in Donegal, in the form McNellus, a few O Neale in Co Down, more in Co Derry, O Neal, McNeale; and many in Co Antrim, O Neill, McNeill; also many in Co Armagh, O Neile, O Neale etc.

The returns for Co Tyrone are missing.

In the Petty 'Census' there are a good number of O Neall and O Nihill in the southern baronies of Bunratty and Tulla in Co Clare; these are a distinct sept from the above.

Most O' Neill births at the end of the nineteenth century occurred in counties Dublin [recte the city] Antrim, Cork [a different sept] and Tyrone.

I am trying to learn more about my heritage and trying to find possible distant relatives of my grandfather david o'neills family he passed many years ago and a lot of information about where we come from as a family died with him...

#1 E King (Toner/O'Neill) Would like to meet family who remained in Ireland when I able to travel there. My great grandmother Bridget Toner born 1872 to Patrick and Alice (O'Neill) Toner and immigrated to the US in 1891. May be traveling there in 2020. wrighteem@gmail.com I have her birth certificate. Do you have pictures that you don't mind scanning/sharing on email? Would love to share a beer with you when I'm there and perhaps visit the area where the Toners/O'Neill (s) lived.

Where are the O'Neill's located in Ireland? I know my Great Great Great (William O'Neill came to America when he was 16yrs old in the 1800's does anyone know of William?

(Part 1 of 3) The O’Neill name can be found throughout Ireland, but its origin is a little complicated according to DNA and new research. The O’Neill story [dominated by DNA tribal marker R1b-L513, Subgroup A1] can trace their origins to the Finn Valley in Donegal, Ireland from 50 BCE. Perhaps the journey begins with the Clanna Dedad; Deda, son of Sen or Deda Mac Sin. The O’Neill surname origin is from two different tribes; the Northern Ui Neill [R1b-L513] and Southern Ui Neill [R1b-M222]. The Cenél Eoghan and the tribes of Donegal conquered much of Ulster (Derry and Tyrone).

(Part 2 of 3) Cenél Eoghan will expand across northern Ireland with their cousins Cenél Conaill and the Northern Ui Neill between 500-800 BCE. The clans of Finn Valley have the same DNA as people from Gwynedd in Brittany. But how could this be? Recent discoveries from DNA testing are unlocking the migration patterns of Celtic tribes as late as 800 CE to 1200 CE. This O’Neill story begins in pre-history Ireland then moves to Scotland as they form part of the Dalriada. Descendants of their tribe will then travel to Brittany, France during the Dark Ages.

(Part 3 of 3) Discover their newly found untold story and how forgotten texts bring their story back to life. From the ebook, “The Tribe Within” learn how DNA unfolds this amazing tale and if you look in the right places, how history narrates this evidence. There is another written account of their story, but it is camouflaged in smoke and myth – it will become the tales of King Arthur. Come follow in the footsteps of Deda Mac Sin and visit https://www.smashwords.com/books/view/401207

Areas of Origin for O'NEILL

Write an email address and click 'Invite' to share this page with more members of the O'NEILL tribe.

Discover where the O'NEILL Family members live around the world

Show off the O'NEILL Family Crest…