O'DONNELL members around the world 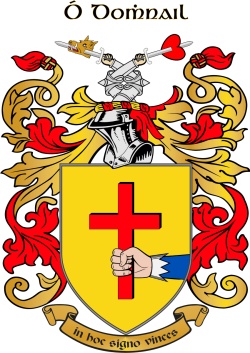 The most famous were the Ó Domhnaill sept of Tirconaill, descendants of Conal Gulban, a son of the legendary Niall Naoighiallagh, or Niall of the Nine Hostages. They were also known as Clann Dalaigh, from their 9th century ancestor, lord of Tirconnel, Dalach. The family actually took their surname from his grandson Domhnall. It is interesting that the ua Cannanáin sept (angl Cannon) had been more powerful than the Ó Domhnaill sept in this region prior to the Anglo-Norman invasion, which shows how the fortunes of families rise and fall.

From their beginnings in the wild country around Lough Swilly, the 'lake of shadows', they came to dominate the north-western portion of Ireland covered by much of modern Co Donegal, in which county the name O'Donnell was most numerous in the mid 19th century. For four hundred years , from the 12th to the 16th centuries, they ruled over their mountain kingdom, repelling all foes, domestic and foreign.

Who has not heard of Red Hugh O'Donnell (1571-1602), arch enemy and nemesis of Elizabeth Tudor's English conquistadores? Niall Garv O'Donnell (1569-1616) was both knighted and imprisoned in the Tower of London by the crown; he spent 27 years in that dark place. The Earl of Tyrconnell (the practice of the English invaders was to grant back to the chief his own lands, under a title and oath of fealty to the crown), Rory O'Donnell (1575-1608), was one of the earls in the 'Flight of the Earls'.

However, there are other unrelated families of the name. That being so, the O'Donnells of Limerick and Tipperary are still thought by some antiquaries to be descended from the same stock as the above Tyrconnell sept.

The 1659 'Census' of Sir William Petty, has the following as 'Principal Irish Names':

Cos Tipperary & Limerick
Only the names McDaniell/McDonnell appear in some numbers throughout these counties in the 1659 'Census'. However, some of these may refer also to the MacDonnells of Thomond, a branch of the O'Briens.

Co Clare
The same point goes for this county: 21 families of McDaniell are mentioned in Bunratty Barony, and these would probably be Thomond MacDonnells not O'Donnells.
There are similar numbers of this name in Tulla and Inchiquin baronies, and in fact throughout the county, where there may have been some 'falling together' of patronymics in 17th century English records.

Co Galway
Returns for this county are missing in the 'Census'!

Co Carlow
The picture is clearer here, for we have Daniell/O Daniell, 7 families in Catherlagh Barony; and in Idrone Barony 14 of Dniell/McDanll, which shows the 17th century habit of substituting 'Mac' for 'O', as well as the normal practice of leaving the 'O' out altogether (see also Co Clare, above).

Co Armagh
Families of O Donnelly occur throughout in the 'Census' records, although these are, in all probability, the sept Ó Donnghaile, of Cinel Eoghain, who moved in the late middle ages from Co Donegal to Co Tyrone. Apart from these, the name McDonnell occurs in Lower Fews; again, these could be Gallowglass, or galloglaigh- 'foreign forces', an offshoot of the great Scottish Gaelic clan MacDonald.

Co Tyrone
The returns are missing.

Counties Donegal, Mayo and Galway were recorded as having the most O'Donnell births in 1890.

Two great O'Donnells
Aodh Ruadh Ó Domhnaill (1571-1602), the hero of Gaelic resistance to English rule (see above); his daring escape from Dublin Castle has become legend. He was poisoned by an English agent in Spain.

Mary Stuart O'Donnell, daughter of Ruadhraighe Ó Domhnaill, 1st Earl of Tyrconnell (see above), was born in 1608 in London, and brought up in England. James 1st accorded her the name 'Stuart' in recognition of their common ancestry, through her Scottish mother, Inín Dubh, 'the dark maiden'. She rejected an arranged marriage, through her stepmother, and escaped to the Continent disguised as a man, accompanied by her servant. She suffered some misfortune, and probably ended her days in Prague.

Tell us about any famous O'DONNELL (or surname variant) you think we should add here. We will get our genealogists to check them out and add them to the list. Thanks!

Join the conversation with the O'DONNELL tribe

Hello I am Anthony O Donnell. My father John O Donnell was born in Charlestown Co. Mayo and had brothers Luke, Michael, Dominic and sisters Annie and Mary

I am searching for my O'Donnell relatives who live in Tiernee or Lettermore. My grandmother was Mary Ann O'Donnell, daughter of Thomas and Barbara ( nee Joyce ) O'Donnell.

Areas of Origin for O'DONNELL

Write an email address and click 'Invite' to share this page with more members of the O'DONNELL tribe.

Discover where the O'DONNELL Family members live around the world

Show off the O'DONNELL Family Crest…